History of computinG
Take a tour of the computing universe 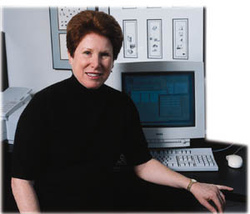 Adele Goldberg was born in Cleveland, Ohio in 1945. Her family lived there until she was eleven, when they moved to Chicago, Illinois. Goldberg had an early interest in math and majored in the subject at the University of Michigan. She continued her academic career at the University of Chicago, earning a Ph.D. in information science in 1973. Goldberg began working as a researcher at Xerox's Palo Alto Research Center (PARC) that summer. There she was part of the team that developed the object-oriented programming language Smalltalk. She became the manager of the System Concepts Laboratory in 1979. Committed to bringing Smalltalk to a wider audience, in 1988 Goldberg cofounded the spin-out company ParcPlace Systems. Goldberg served as CEO and Chairman of the company, which created development tools for Smalltalk-based applications. After leaving ParcPlace Systems in 1995, Goldberg established a consultancy. Among her many consulting projects, she has designed systems to author and deliver online courses meant to enhance equity and high achievement in secondary school math and science.

Goldberg was president of the Association for Computing Machinery (ACM) from 1984 to 1986. She won ACM's 1987 Software Systems Award with Alan Kay and Dan Ingalls and PC Magazine's 1990 Lifetime Achievement Award.

In this interview, Goldberg discusses her educational and work history. She recalls her experiences as a student at the University of Michigan and at the University of Chicago. Next, she covers her stretch at Xeorx PARC, sharing her views on the work environment. Here she speaks at length about her work on Smalltalk, including her leading role in its commercialization. Goldberg is candid about the challenges she faced in forming and running spin-out company ParcPlace Systems. In addition, she discusses her two-year tenure as President of ACM. Finally, Goldberg offers advice for young women who are considering a career in computing.